My year in review

I have been thinking about the past year and it has been an interesting year. We set up The Hubby's best friend and that may lead to marriage. Our oldest daughter B is now a married woman after we threw her a huge wedding/reception. We flew to California to visit the youngest, A, and my friend (first time for me.) Found a personal trainer and have lost 25 pounds since last January. July spent a few days watching The Hubby on a ventilator in the hospital after his accident. Right after his accident I began having health issues, probably brought on by stress. Now it gets weird. Stressed by the accident. Stressed at still dealing with the loss of my friend and mother and relationships. Stressed by sister pulling a bonehead move with her cat. Stressed with the holidays and the changing of it all. Stressed by the financial strategies we are all facing and the shifting of what I have to do with our stuff and business. I'm just stressed and trying to deal with it all and trying to wrap my head around being 52 years old and still not sure what I want to do when I grow up. Awww, my life. Well, on to 2009. A toast to a better year, let's hope.

Not only do keep this online journal but I also keep handwritten journals and have for many years. 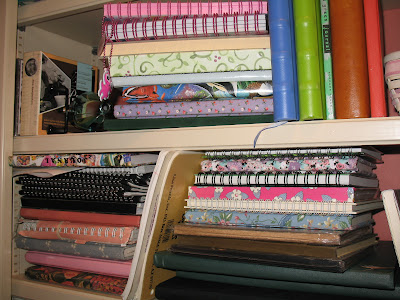 I've only been on the online one since 2006 but I also print all of my entries. I keep them in a three-ring binder. 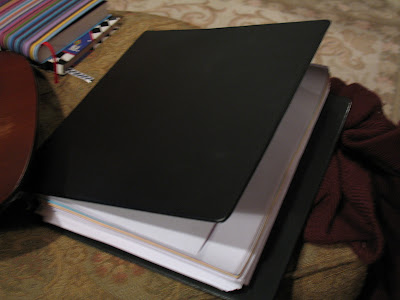 I'm afraid that some day they will be gone and for goodness sake these are words that I have written and I AM A WRITER. I may not be published, well, I guess I am if I am on the web, anyway, headache. I AM A WRITER and someday, someone will read these and maybe find them interesting, maybe my great grandchildren. I'm getting ready to close out my 2008 journal and begin the 2009, so today, probably tonight I will write my last entry and tomorrow I will write the new one. 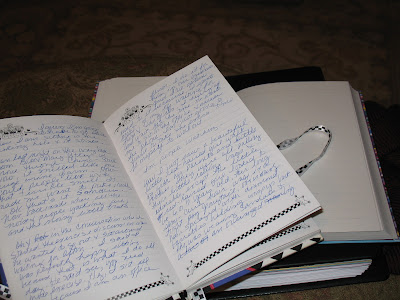 I used to do the New Years resolutions but that is just a stupid thing for me. The first one used to be, "I plan on losing blah, blah, blah pounds." Never happened until last year, after I didn't write about it. So no NY's resolutions for me. I am just going to try and survive 2009 'cause I think we are in for a very bumpy ride, even rougher that 2008. See everyone next year.
Posted by Jill of All Trades at Wednesday, December 31, 2008 3 comments:

I am so excited today. I have enrolled at TCC in two writing classes, one in February and one in March. I have also enrolled in an art class at Ziegler's from January to May in whatever medium I choose to use. I have to decide on oil, acrylic, charcoal or watercolor. Watercolor is out as I have never been able to work with it successfully. I think I will use oils as I already have some of the tools and have used it the most. I might like charcoal at a later date. The writing classes are going to be just two evening classes. The one in February is:

"TIME TO WRITE NEW!
No excuses! In one class period you’ll learn strategies to conquer procrastination and perfectionism, the times of the day when your energy is right for writing, how to use your intuition to make decisions and how to say “No!” This class is taught by a certified creativity coach and published author of SECRETS FROM A CREATIVITY COACH."

The second one in March is:

"SELF DISCOVERY THROUGH WRITING NEW!
Every person has defining moments in their life, moments of sadness, happiness, trauma and accomplishments. By breaking your life down into age-related categories and writing about the defining moments in various stages of your life, you can begin to get a greater sense of who you are – how you arrived there, where you are going, and why you act/react the way you do. In this class, you’ll write about your life changing experiences in early adolescent, young adulthood, mid-life and, or, senior years."

Then, at the prompting of my therapist guy I "may" join a writers group that critiques your writing. I'm not sure about that as I don't really have too much to share but I'll try. It's a rather scary thing to share although I do share here on my blog it is somehow different. This would be in person, eye to eye, oooo...chills. Big step for me but I'll give it a whirl.

So this means that I will be pretty busy with art classes, writing, critiquing, bowling, personal trainer and I guess I'll throw a little work in there. I am so in need of trying to find me again. I have felt so swallowed up in our business, raising our family and all that is The Hubby that I have lost what I need to have a passion for. It is my turn. 2009 is for Jill!
Posted by Jill of All Trades at Monday, December 29, 2008 7 comments:

A Change of Scenery

As some that have read my blog have noticed I have changed the scenery here. I am a true Gemini as I have to change my surroundings in some way or another. I can be set in my ways and do like things not to change in a lot of areas, usually areas I have no control of but here, on this blog I DO HAVE CONTROL. So I have again changed my page. I just didn't like the old template and this one is simple but I love the colors I have chosen. Let me know what you think.