Yesterday my "friend" called and wanted to know if I was free for the evening. I was and she told me to be ready at 7 for a surprise. She arrived a few minutes after and then we spent a bit of time looking at the plans for our bathroom add-on and remodel then chatted with The Hubby about his hanging of his leg lamp party lights with his Daisy Red Rider BB gun and faux broken glasses. Then the conversation swiveled around to a couple of her children, of course.

All of a sudden she said, "We gotta go." So hopping in her car, I was taken to a destination unknown. (The whole drive there was a conversation on her third child.) A few minutes later we arrived at the movie theater. Ah...a movie. We got in line and she asked which movie I thought we were going to see. I looked at the marque and guessed Goonies. She smiled widely. The Goonies movie is one of my all time favorite movies and I have never seen it on the big screen so I was surprised it was on. The theater is running classic movies.

After the movie we had a nice 10 minute drive home talking about just stuff. When we pulled in the drive, I thought she would come in to visit or just sit in the car and talk, but she pretty much told me I needed to hop out so she could pick up her youngest at the airport. So the evening spent with my friend, which I have not had an extended conversation with since August, consisted of total conversation time of about 20 minutes, most of which was about her children.

Today we were supposed to close on the new property. We were supposed to close last Monday. Both days we have not closed on the property and I don't know if it will even happen. I think we are getting the run around and now the words "my attorney" have been tossed in the ring. The guy we have a contract with is in the middle of a divorce and the property is mortgaged, well, apparently the soon to be ex-father-in-law bought the mortgage and is dangling it over the poor guys head and is saying that the pay-off is more than was stated. EGADS....we are caught in the middle of a stupid divorce of which the in-laws are involved. The Hubby is really sad. He has been so excited about possibly moving the business there and expanding.

Now to a very sad phone call. This morning at the office I heard my cell phone ring in the front office and B answered it. I heard her say, "Papa, what's wrong." It was my Daddy, her Papa. I rounded the doorway and saw tears welling up in B's eyes. I was terrified. It was bad but not as bad as I thought. She handed me the phone and whispered that it was Peaches, his cat. Daddy's little devil cat Peaches. 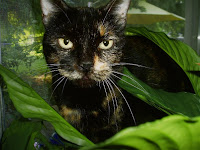 I took the phone and Daddy was crying. He just had to have her put to sleep and it was crushing him. I knew she had not been well but had no idea it was quite that bad. He was sobbing and said it was like losing Momma all over again. You see Peaches was Momma's cat, but Peaches and Daddy had bonded since Momma died and it was sort of like losing Momma again for him. Poor guy. On top of that my Daddy has never, I repeat NEVER had to make the decision of euthanizing an animal, a pet. Momma had always made that decision. Hell, in fact I had to physically take his suffering, dying dog out of his arms to have put down because he just could not do it. I feel so bad for him because now he is truly alone in that house. That cat was his company, his friend. I'm sure he is crying tonight. This has also been a blow to me. When Daddy said it was like losing Momma all over again I was immediately taken to a real low. As I have written before I'm still dealing with the loss of my Momma and my best friend Gail, along with the death of our dog in the midst of it all, nearly 3 years later. I've been trying to make a decision to see a counselor, a therapist as I'm still sad. So this morning just took me back down again.
Posted by Jill of All Trades at Monday, December 08, 2008

There's so much to comment on here, Jill. I know I'll miss writing some things. First of all, I do know what you mean about your friend suddenly leaving you abruptly and making you feel badly. It was a disappointment but I really don't think she meant to hurt you at all. Just the opposite, I think. She probably had a lot on her plate and was busy with her life. I do have a friend who has that same problem. It was actually rather lovely that with her busy life, she wanted so much to still make time to touch bases with you and stay close. That's a compliment to you and shows how much she loves you.

I'm so sorry for the house problems and especially sorry for your losses. Those are indeed hard ones to bear. I would recommend the counselor. I've heard how it just really helps to talk to somebody about it and to just let it out and sort through your feelings. You really have a lot to carry trying to deal with your own anguish and being strong for your dad at the same. Take care, Jill. We're all here for you anytime.

I'm so sorry about the kitty. Bless his heart.

Maybe a counselor is a good idea. Sometimes just talking to someone who can give you an outsider's view is helpful. I love mine. Too bad you don't live closer. :)

I have a litter of precious little 6 week old barn kittens I'd love to share with you and yours. I fall in love with all of them. And, I have the name of someone in Tulsa who is good for what you're going through. I won't write it here but let me know if you think you might like to talk over things with him. Hang in there. Donna Baker

Aww Jill first of all I am so sad for your daddy. I am a total baby about my kitties and it always upsets me when I hear news like this from others. So sad.

As for your friend, well the thought was really nice with the movie. I would ask is she always like this, dominating conversations, if so then yes I'd be fed up with it too. If not so much, then maybe she just needed to unload like we all do at times.

But I know what you mean I have this kind of relationship with my mum, and she does my head in as much as I love her!

I don't know what to say. I feel so badly for your dad. I feel like hugging you. And I am a big believer in therapists and writing. Good luck with your decision girl. I know it's a hard one. Love to you.