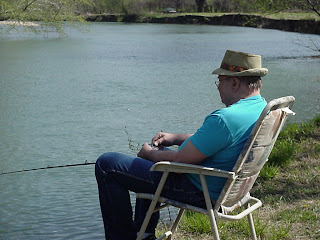 Don't get too upset.  I'm saying Bye Daddy as he has decided to go live with his sister halfway across the country for 6 months.  He has informed us that he will begin his journey Monday, early.  I'm as excited for him as he is himself.  I think he feels like it might be a new beginning of sorts.  He's had $600 worth of work done on his car to ready his drive.  He has forwarded his mail to my house so I can pay his bills (I have his checkbook).  We were able to stop his newspaper for 6 months online.  He's getting ready.  We, the family, or least those who were able at the last minute gathered at his house on Thursday night for a farewell dinner.  I went by KFC and picked up a bucket of chicken and we had a lot of laughs before the big day.  He took The Hubby around the house showing him stuff that might be done and me many closets and cabinets that we can clean out.  Yes, we have told him that we are planning to rent a POD and load all of his furniture into it, clean out the house.  We, The Hubby and I have offered to repaint and carpet while he is gone.  The house, his home, my former home has been lived in by him or my grandparents for over 60 years.  He and Momma were the 2nd owners next to Momma's parents.  Pretty cool.  It was a house of a smoking family (NOT ME) so the walls are, well ICK!  They also had animals that viewed the carpet as grass.  Again, ICK!  It is an old house but it is his home and was our home.  We want to get it back and close to sort of new for him before he comes back.  He's completely rehabed the yard, getting rid of all the flowerbeds that Momma insisted she wanted so now it is time to clear out the house.  I kind of hate it but it is his home now and he should have it like he wants it.  He doesn't care what we get rid of at all.  I think it is just too overwhelming for him to think about dealing with.  There are closets that have not been touched in probably over 25 years and I think I will purchase plastic gloves to deal with them, spiders you know.  He has also asked that we have it fumigated and I told him that we would probably have to get rid of all the kitchen stuff in the cabinets and he was fine with that.  I'm telling you ICK!!!  It's really kind of exciting as it will be a project and I love a good project but be prepared to not hear from me regularly when we start the project.  I just feel that doing this now will help when we, my brother and sister and I, have to sell the house when he is really gone.  We're just getting a headstart.  Maybe I'll have pic's.

Your post title kind of scared me a little.

Sounds like a great project. I just leave getting rid of stuff. It's liberating.

Sounds like a lot of work so see don't apologise for taking the time off from your blog. We'll still be here when you get back:)

It was probably overwhelming for him to keep the house as clean as he would like. He might be a pack rat like my husband, too. It's great that you're cleaning it all up for him. He'll love it.

Goodness! You certainly have your work laid out for you. Good luck!

you are just a fantastic daughter. really fantastic.

It sounds like the best things to do. I have not been there yet myself.

Thank you for stoping by my blog. I love Country Girl her pictures are great. Your Father is very lucky to have you clean out his house You might find some treasures that you haven't seen for along time. I wish some of my kids would get rid of some of my stuff(junk). I too think I have a little ADD.

Oh! so glad...when I read this caption I thought "oh no! what happened to her daddy" - *whew*!