A Lot of Babble

This hip thing is honestly very awesome. On Thursday I told The Hubby I wanted, NEEDED to go out to eat.  Sometimes I just am over trying to create meals and he is quite content to go, thank goodness.  So we went to The Polo Grill in Utica Square.  They've done a huge remodel, expanded and we've not been there since that was done.  Goodness it is very large with outside eating, big bar, etc. We didn't have a reservation and they kind of oohed and ahhed about that but we asked if we could sit in the bar and they said certainly.  Honestly there were TONS of empty tables, especially in the bar.  The Hubby and I were kind of amused watching a lot of "OLD" money walk past in their suits and ties and ladies with their bags and pearls.  Some could barely walk in and one guy had a nice but baggy suit on and the dirtiest worn out tennis shoes I had ever seen.  Made me giggle a bit.  (I love to people watch.)  It was a nice meal, mine was a tad tepid and the haricot verts (I call them green beans) were really pretty and green but so raw I could barely crunch through them.  I know that's the trend but a bit more cook would be better.  During dinner The Hubby suggested we go downtown to watch our jazz vibraphonist son-in-law perform at the jazz club Low Down that is under (stairs) the restaurant Duet.  (This is a long roundabout story...)  Normally, pre-surgery I would not even have thought of doing that because of the possibility of walking and STAIRS, oh no.  I responded, "YES!"  The Hubby was thrilled and so was I.  My first instinct was to say no but I didn't and am very glad I was agreeable to the idea.  So off we went, found parking a block and a half away and surprised Nick.  We stayed through his first set and then headed home before we turned into pumpkins.  I can get out now but the sleep monster will not let me stay up to 10 anymore. LOL!  We got to meet a lot of people, his fans and even one couple that saw him in Kansas City a month ago, came down just to see him.  He does have a nice jazz fan base and it's wonderful to see. 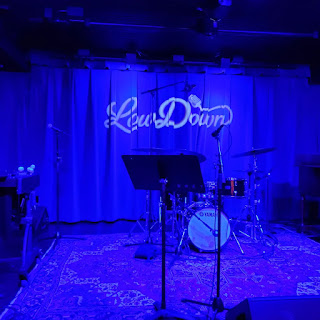 That day I had gone to the studio and quickly painted this little bluebird and I mean quickly.  Sketched it first then splashed a bit of paint on it and was very happy. 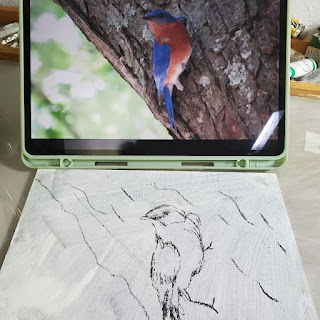 I love painting birds and dogs, cats for some reason challenge me. 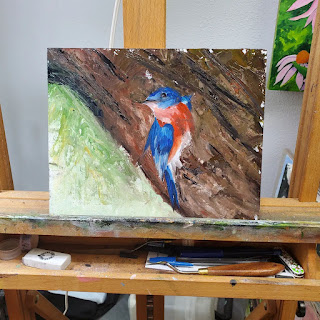 The holiday weekend usually doesn't mean a whole lot because if it's at the end of the month and we have to work, in the office, billing.  The plan was to come back like usual on Sunday to work.  We did get away to the cabin early on Friday to enjoy the day and evening.  The next day I had another one of my painting groups at the wigwam this time as it was NOT flooded.  I would have had more people but only 3 were able to show up.  The others, illness and kiddos got in the way.  We had a small nice group though and I felt more like I helped this time.  They asked a lot of questions and I was able to guide one to a fully finished watercolor, her first ever painting.  She was absolutely thrilled with it.  One used oils for the very first time and got a bit frustrated but she just barreled through the painting like she had been doing it for years.  The other did oils just to play with mixing and really enjoyed it.  I tried to lend a lot of tips about mixing paint, videos to watch, help with shadows and light.  It was fun.  The thing I need to learn is NOT to get too absorbed into what I WANT to paint as it is to help them and I felt I was a bit lacking in that but they want to watch me.  Have to fine tune this thing called "teaching." 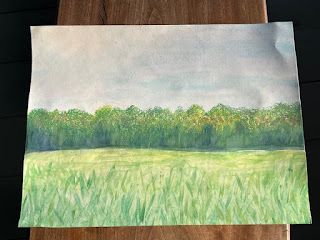 Paula's first painting!
I had set up more still life stuff mainly for me to paint.  It seems easier than trying to paint from my IPad as I usually do. Plus setting up stuff in the beautiful wigwam was fun. 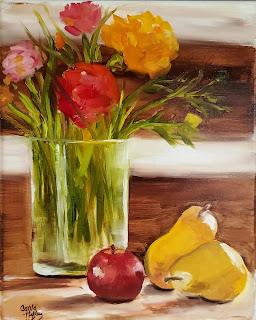 Later in the evening we had dinner at Peggy and Tom's.  Hadn't been to their cabin in quite a while as they've been gone a lot the past few months.  It was a wonderful evening on their porch visiting with our crew.  I made a huge cheese, fruit and cracker platter they loved.  Tom grilled chicken k-bobs, there was a tossed salad and corn on the cob.  It was a nice summer meal.
I do have to remember those who are not with us anymore.  Really, I kind of put that stuff out of my mind mostly but it is slammed back with photos of graves, flowers and memories on Facebook.  I don't want to be sad but remember the wonderful lives they lived here with us on this earth.
FYI, our girls are on VACATION!  Sadly they won't be here for my birthday next Saturday but I'm throwing myself a small party.  I couldn't decide if I wanted to spend the weekend at the cabin or here in town and opted for town because ALL of our crowd are gone at the cabin, the ones I would party with.  So I invited some of my oldest friends from when we used to go to church, Tonya, Paula and Tracy and their wonderful hubbies over for dinner.  I'm going to pick up Olive Garden lasagna, salad, breadsticks and told them to maybe bring an appetizer or dessert.  One is bringing special cocktails.  She is queen of those!  FUN.  It will be a nice low key time with old friends, what I want to do.  I told The Hubby that morning I would like to go to breakfast and then I have an art meeting, then back home to ready for friend-time.  It will be a great day.
This short week I have lot going on.  Linda and I are setting up for the art opening at the BA Museum.  At first it was going to be a Wednesday set up but got notice from the director that we can start on Tuesday!  I have The Hubby's help on Wednesday and his truck but I plan on taking a huge load down on Tuesday and really reassess what I need and don't need to bring back on Wednesday.  Linda can't do anything until Wednesday.  I want to be able to split the space evenly for the two of us, I don't want to be a wall hog.  It's exciting.  I have to get wine and on the way down on Thursday for the opening I will pick up food trays from our caterer.  I told The Hubby he only has to be there for about 30 minutes, there's a dance thing I think.  Not a problem.  I do want him to appear and support.
Posted by Jill of All Trades at Monday, May 30, 2022