What a wonderful weekend.  Friday evening was a very small gathering for taco salads, laughter just FUN!
I was a bit anxious because the next morning I was to teach my first painting class.  Because of the flooding the wigwam was flooded so we moved it to our screened porch.  I tossed and turned most of the night because I was a bit nervous.  I kept going over and over in my head what I was going to say, how I was to start it.  I was of course up at 6:30 and started setting up some of my supplies and a couple of still lifes to paint. 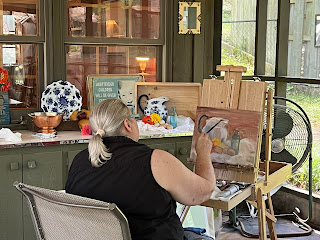 9 am rolled around and they started arriving.  I had hot coffee and fresh cinnamon rolls (they were Rhodes frozen) to offer.  HERE WE GO....
In total 6 ladies joined the group, and all but one was going to do watercolor.  I'm not expert with that but I was sure I could help.  We honestly sat for nearly 45 minutes just talking and I really could hardly get a word in edgewise but it helped to ease my nerves a bit.  We did talk art, supplies, what to expect and they had tons very good questions.  We also had one that just came to watch.  Finally I asked them if they were ready to paint or would they rather watch me a bit to start.  Almost in unison they wanted to watch me so I got to it and they peppered me with lots and lots more questions which was interesting for all of us. 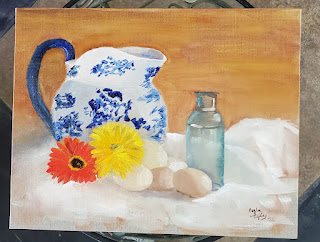 We have another session in two weeks and I think if they want we can do it more often on the porch if we can't get the wigwam.  I just want to impart knowledge and encourage.  It was really a very fulfilling day for me.
When they left I sat and continued to paint, trying to finish this to have something to post and encourage.  I was so in the zone I didn't realize that I sat there for an hour and a half.  Finally at 1:30 I stood up and creaked my bones into grab a quick sandwich and drink before I knew a nap would be had.  I was tired from not sleeping the night before and having the morning over, tired but fulfilled.
As I sat in my chair all of a sudden I heard the leaves rustling alongside the screen and knew instantly it was a snake.  We've had a turtle a few times and it's a different sound.  This was a very long sensation of the leaves rustling along the way.  All of a sudden I saw a flick of a tail.  I got up and grabbed my phone and went around the glider and the slithering stopped.  I looked and looked and there he was looking at me.  I was pretty sure it was harmless when all of a sudden I heard a rattle and his tail was rattling but the rattling was the dry leaves.  He was mimicking a rattlesnake, trying to scare me off.  He needn't worry, he was quite safe with me. I don't kill snakes especially harmless snakes.  I put a call out on Facebook with the picture and quickly found out it was a non-venomous Eastern yellow bellied racer.  So pretty and soon he was on his way. 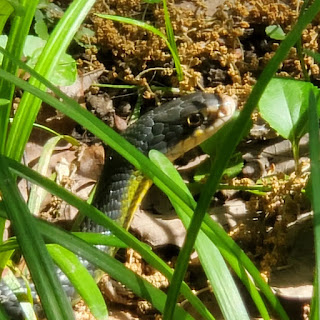 Finally, naptime.  I stretched out on the glider without another thought of Mr. Yellow Belly and slept for 2 hours.  I had to get up then and shower as we were hosting a couple of couples for fried sand bass.  We had a couple of bags of fish in the freezer, the other two couples each had a bag and dinner was made.  I'm all about simple food so I'd made a broccoli slaw (coleslaw sauce) and canned pork-n-beans, cinnamon rolls and chocolate candies.  Dinner was absolutely awesome and we enjoyed visiting on the porch until after 9 o'clock.  We were both so tired but The Hubby's job is clean up so he did the dishes and I headed for the bed.
The whole weekend was #1 in my book.