A Purging I Will Go (and more) 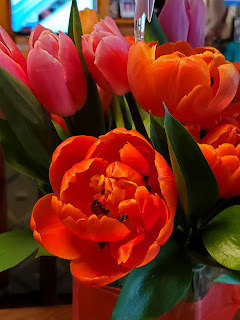 Tulips, red and pink tulips.  Yesterday one of the health people who sat at Gloria's bedside for many hours sent flowers to us.  I think the girl actually went to high school with one of the grandsons and not on Gloria's care but she cared for the family and spent time sitting.  She sent the tulips because during some of the rantings that my mother-in-law was rambling on about was that her favorite flowers were red and pink tulips.  It was so thoughtful of the sweet friend and classmate of Jason's.
For the past several days I am finding myself bored, yes bored.  I don't feel much like painting and am spending a lot of time just sitting on the couch staring out in space.  These losses lately are almost more than I can stand.  I'm also finding that I am angry.  I'm angry at a lot of people and things that are happening in my life and the WORLD!  I'm finding it tough to have a voice, not finding my voice, and to be able to express it.  Honestly I feel my vocal cords are tied, so to speak.  If I open my mouth I am quickly shut down for expressing my opinion and I'm finding that almost intolerable, which is making me quite angry at everything and everybody.  Yesterday I had a luncheon with some of my high school friends that I haven't seen in well over a year.  While nearly through with my meal one says something about NOT being vaccinated, not going to get vaccinated!!! My mouth dropped to my lap.  (Luckily I wore my mask and the restaurant was nearly empty and I was at the end of the table pretty far from the others that were saying this stuff!)  They went on to pop off about it being experimental, they already had Covid and were never sick, some saying they've never had vaccines...blah, blah, blah...I said WHAT!!!!!  Then I said, "that is why...." but I couldn't finish that statement.  I didn't want to get into an argument, and it was going to be one.  I acted like my phone got a text and that I had to go to handle some "funeral" stuff for The Hubby and I was OUT OF THERE like lightening!  STUPIDITY, and I will not be going again to any of the luncheons they have for a very, very long time.
Now...on to something else.
With the help of my girls I've been purging various things from my house.  (This act has some issues too.)  One of the things I've been wanting to do is purge my cookbooks.  I had probably close to 100 cookbooks and I most never use them.  Oh, I do enjoy reading them when I get them but I almost never use them. 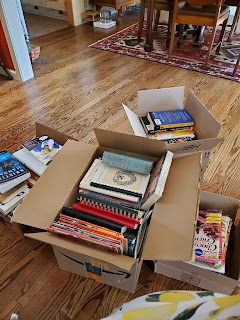 There are some exceptions:  Pioneer Woman, Barefoot Contessa, Jamie Oliver and I have The Cake Bible and Pie Bible that I gave to Momma and Daddy many years ago.  There are, of course, a few others that I have kept that I do use and cherish.  I also have some extremely old ones.  One of them I checked is 121 years old and I believe came from my Grandma's.  I even had duplicates of several of Ina Garten's (Barefoot Contessa) cookbooks.  Not sure how that happened.  Those boxes in the first photo are gone, BYE-BYE!  The Hubby carted them off very quickly.  I had THOUGHT about having a garage sale but he apparently had other thoughts and took action before I had a chance.  This is another place where I'm having some issue.  Yes, I do have a few "collectibles" around the house.  They are not invasive, well, maybe my books and Longaberger baskets could be seen that way.  But, the books are on shelves, not lining walkways down the hall and the baskets were in a closet on shelves.  It is my house too and these are my things that I love.  The Hubby is just too quick to agree to get rid of stuff, MY STUFF in particular.  He sees no value in my things, and chooses to take it all to Goodwill without thought to what I want to do with it.  I am not a hoarder at all but I can see where a person could go off the rails with that.  It kind of takes me back to an incident that happened just before I married The Hubby.
My family lived in a small two bedroom house for a family of five.  My sister and I shared a bedroom and a bed.  I was 19 getting ready to marry and in the living room I had a trunk that I had recently refurbished.  It was a trunk that came from Jay, and was in one of the barns.  It belonged to my Greatgranny's sister, Melissa, who died after her appendix ruptured at age 16.  I cherished it, still do.  It was beautiful when I finished and was full of some of my things to take into my marriage and memorabilia from my childhood.  The Hubby and I had rented an apartment a couple of weeks before we were to be married but were NOT living there because it was being painted.  My father (probably drinking) became enraged about the trunk in the house one evening and wanted it out immediately.  The problem was the apartment wasn't really ready but he was yelling in my face and threatened to take it to the trash.  He was going on and on about some of my other things like a few of my books (I only had a few at that time.)  He was absolutely unreasonable about it.  I was distraught.  He was almost wanting me to move out right then for some reason I felt.  I think there was even talk that I move to Granny's.  I ended up taking it all to my Granny's and moving it to her garage until we could move to the apartment.  This incident has plagued me for years and I often feel that The Hubby is doing the same thing my Daddy did.  I feel devalued and well, angry.  I have dishes that I love that were my granny's and his mother's that he is on a tear for me to get rid of too.  This hurts, it hurts a lot.  I'm in agreement that it is time to declutter my cabinets but frankly why is it all MY stuff!  Why is he after me, like a child to toss out my things, things that I value, not monetarily but with memories and ties to the past.
______________________________________ 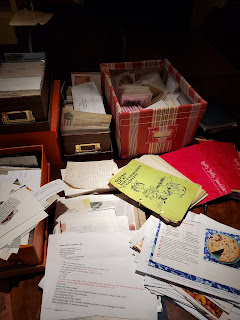 Back to purging my recipes.  Now that the cookbooks are purged it is on to the mountain of recipes that I collected over the years. 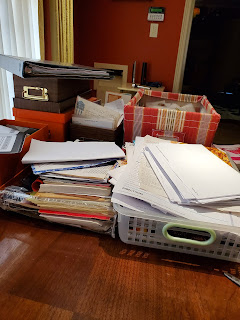 I've ripped, cut and glued so many recipes to little index cards. I have four index boxes and another basket of loose ones, not in any kind of order at all.  So yesterday I started going through each and every single card purging.  If I ripped it from a magazine then generally I am tossing.  I have some criteria that I will keep though:  a list of few ingredients, still looks like I want to cook it, handwritten.  Those that are from magazines and I keep I plan on trying and if they're good I'll keep if not, then out they go.  My goal is to possibly make the recipe, take photos and have either a blog or a Facebook account that has nothing but these recipes, maybe a recipe a day or something.  It's an idea and I hope I can make it happen.  It has been suggested that I scan all the recipes and I may but honestly I love going through the cards. 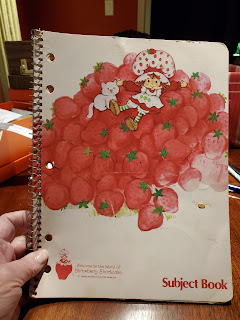 I also ran across this little jewel, a Strawberry Shortcake spiral notebook.  Actually, I know the lady that created Strawberry Shortcake.  She lives in Tulsa and is in my art group.  When I opened the notebook I found it had several pages of handwritten recipes that were in Granny's handwriting.  There were some of hers, family and some of her friends. Best of all it was Granny's handwriting.  I will never get rid of that. 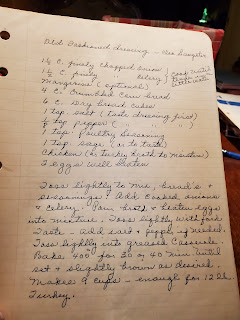 THEN I saw this one from Mrs. Boggs.  If you are a lifetime Tulsa (or Broken Arrow) person you would know of Boggs Farms in Bixby (not Jenks where Granny wrote that.)  Mrs. Boggs lived on the huge property in a two story house and there were fields and fields of veggies that she grew and sold.  It's where we got our Silver Queen corn, green beans, tomatoes for canning, okra, peppers, cucumbers, etc.  We even got to go in the fields and pick sometimes.  I will try this for sure. 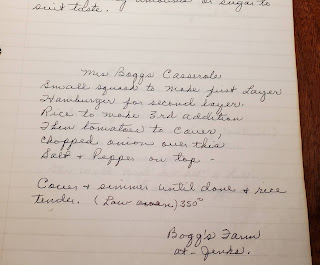 My question, how many more of MY THING are going to have to be tossed to the trash heap before he is satisfied.  It's a feeling of my self worth being challenged.
Posted by Jill of All Trades at Wednesday, April 21, 2021 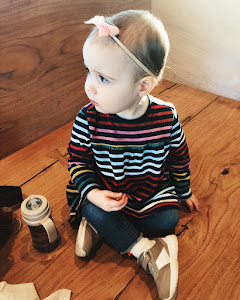