Thanksgiving of Years Gone By

As I mentioned in yesterdays post, Thanksgiving was a favorite for my mother, and mine.  We spent nearly every Thanksgiving holiday at my great-grandparents home in Jay, Oklahoma.  Mom would load up the car with us and every turkey thing possible and off we would go for the holiday.  This house is/was so full of memories for me and where I wanted to go when I threatened to "run away from home." There was no indoor bathroom until I was a senior in high school so the trips to the outhouse at Thanksgiving were mighty cold.  If you had to go at night there was a large coffee can under each bed and you perched and peed. 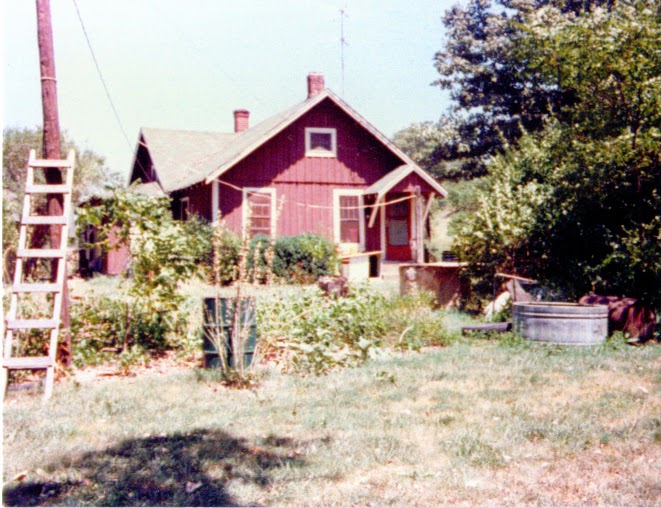 In warmer weather we could sit under this tree on the bench or some old rusty chairs.  That driveway in the background was long and usually full of lots of cars.  Most generally it was full of hunters cars that would bring in deer for Big Dan to help clean.  My memories of deer when I was young were of them hanging in the tree dripping blood.  Yup, my first look of a live deer didn't come till I was in my 40's.  But that was very educational for me.  They lived off of the land.  The only thing they bought were eggs, flour, sugar, and probably other things, but I was a child and that is what I saw.  They did receive government cheese and peanut butter that I know of.  One time I took a ride with Greatgranddaddy in his old Ford truck to one of the chicken houses to buy eggs.  Let me tell you he was a speed demon in that old rickety truck.  It was a scary ride! 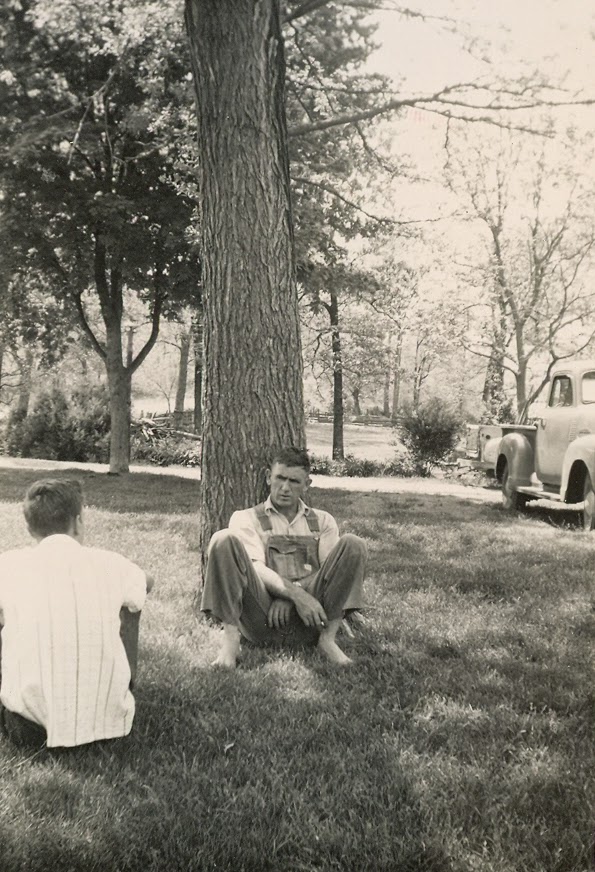 In the picture below, that is Big Dan, with a fox or coyote they were skinning.  They ate EVERYTHING off of the land. 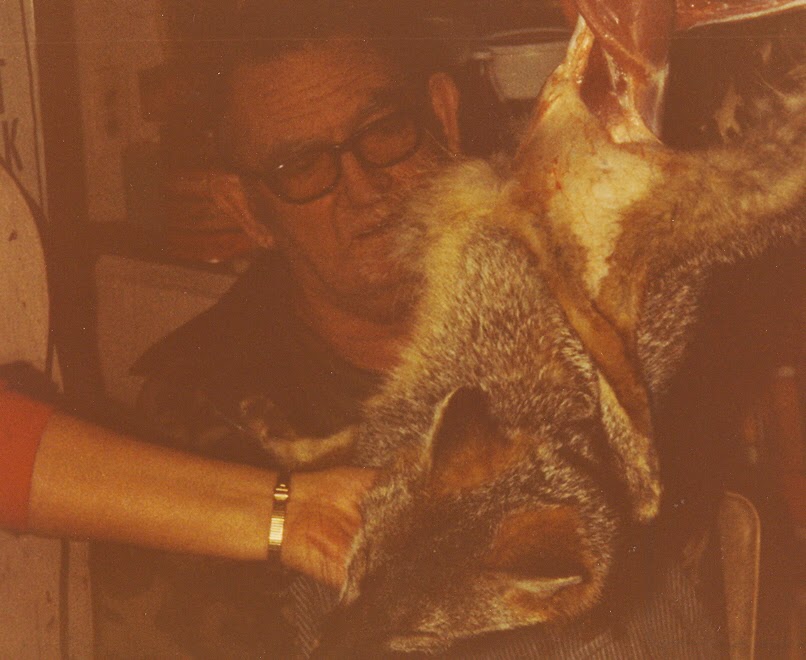 Awwww, Momma at the dining room table.  I'm sure the turkey was in the roaster as that is how they cooked it.  When I was little all they had were the electric roasters and Greatgranny would get up every hour or so and baste it.  The stove was a wood burning stove for a long time and then Granny bought them an electric stove and Momma would cook the turkey, the way I cook it today, hot and fast.  We cooked a totally foil-wrapped turkey at 450 degrees.  The time depends on the weight of the turkey.  I did a 22-1/2 pound turkey yesterday in 3-1/2 hours.  Fell off the bone. 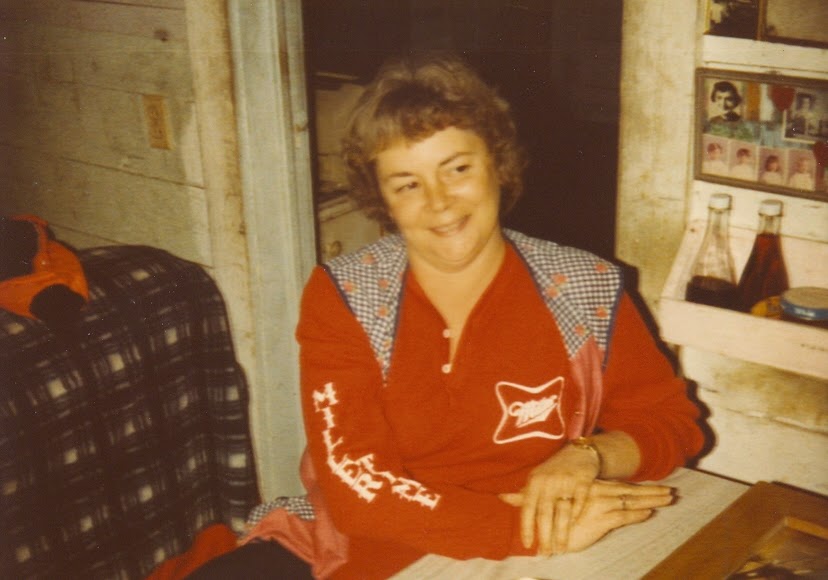 I channeled Momma yesterday.  I miss her so. 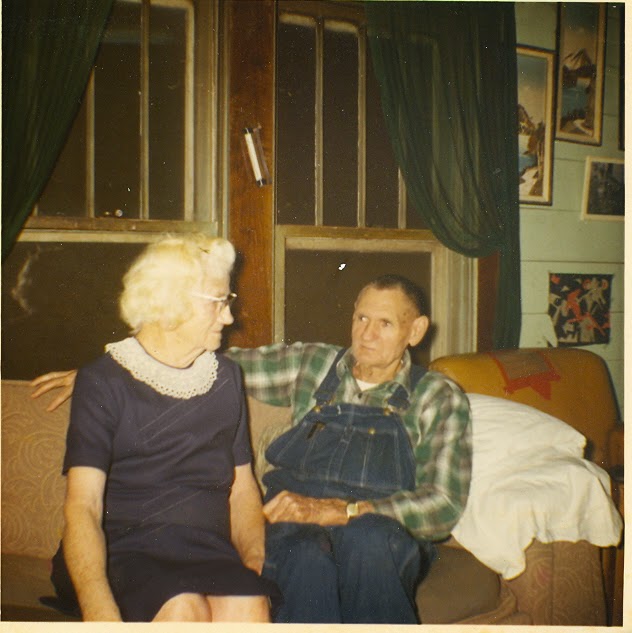 Greatgranny and Greatgrandaddy, my most favorite people in the world. 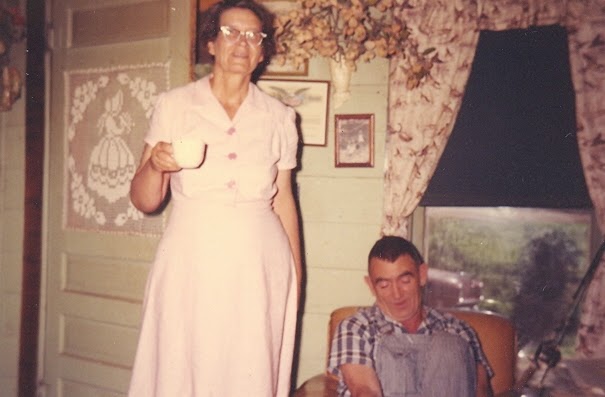 Great-Aunt Marie or Granny Ree as she was best known and Dan or best known as Big Dan.  Big Dan was the son of Greatgranny and Greatgranddaddy.  They actually owned the house of which I did not know until I was in my 40's.  To me it was always Greatgranny's house.  Big Dan never wore shoes, except maybe in the snow and he always, ALWAYS wore overalls.  That door behind Ree is a huge memory.  The covering was a crocheted something, I used to know the name.  It was beautiful and I loved to look at it.  In this picture where the camera person is standing to take the picture was a wood burning stove that heated the entire house.  Awww, the memories. 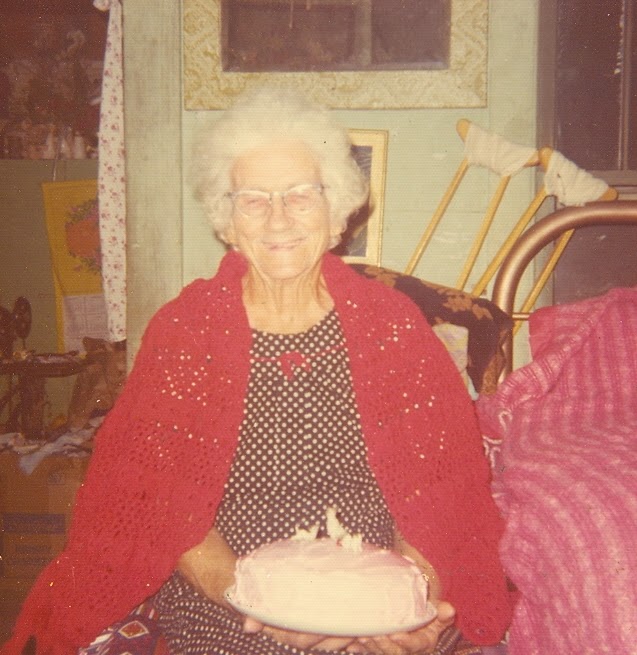 Greatgranny.  She had fallen and broken her ankle, see the crutches in the background.  I think she died about a year later.  She was the most awesome lady and I loved her dearly.  Her name was Maggie. 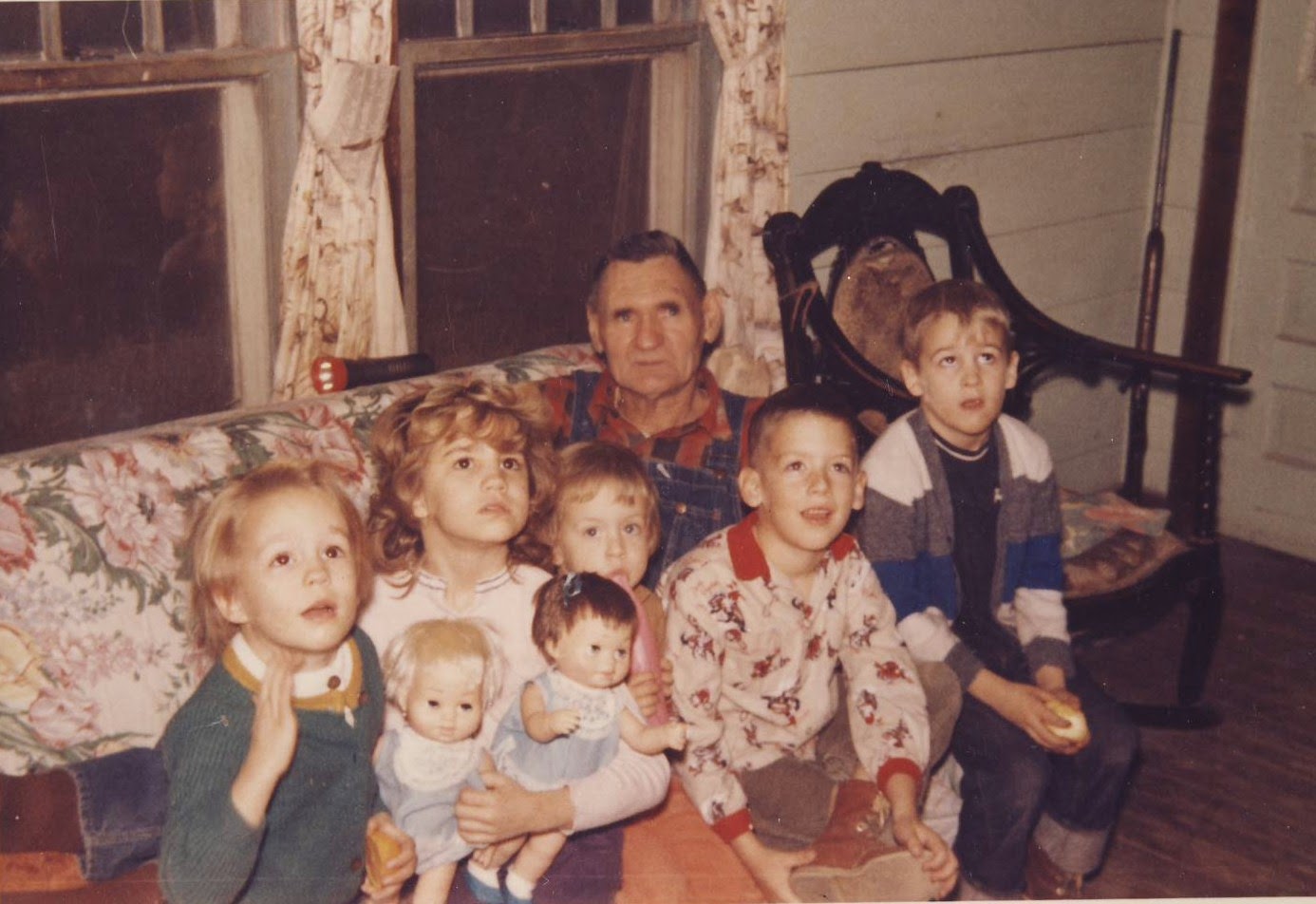 The many, MANY children that were always running around the house.  Sis is on the end, I am next to her and Bro is at the other end.  The other two were friends that were always there.  Have no clue to their names now.  See the gun in the corner.  There were guns everywhere in that house, EVERYWHERE, but we knew better than to ever, EVER touch them.  That was just the law of the household, and in mine that I grew up in.  We were taught a healthy respect of them.  Good grief we saw the effects of a gun, there were dead animals everywhere in that house and outside.  (My stand on gun control!)

Just FYI...I write a lot of these posts because I know my girls and grandchildren and great grandchildren will read them and I want to pass on the stories.  My hands don't write as well anymore and can't write as fast as I type so there you go.  I also have my blog posting printed every year in a hard bound book for them to read.  I use Blog2Print in January every year.
Posted by Jill of All Trades at Saturday, November 29, 2014

Fabulous that you have so many pics.

Our Thanksgivings were similar. We would go to our Aunt and Uncle's ranch way up a valley in Idaho. No electricity for years and definitely a long time without indoor plumbing.

Huge meals and lots and lots of kids running everywhere.

It was certainly a different time, wasn't it?! I have similar memories of my GG's house and out house, but no guns around that I can remember. Great stories of your family.