My weekend was shear bliss.  The Hubby had a lot of dancing to do this past weekend and I had absolutely nothing to do, so I boogied off to the cabin by myself.  I've actually been a bit afraid to go by myself because I've been so unsteady on my feet.  Lately though, since I've lost 17-1/2 pounds so far, I feel lighter and I am moving so much better.  As long as I take my Aleve every morning I am so much better.  So I thought, I can do it.  The issue there is that when I arrive I have to go down the stairs to the garage to turn on the water and flip the breakers to the hot water heater and stove.  But it was okay, I was okay. 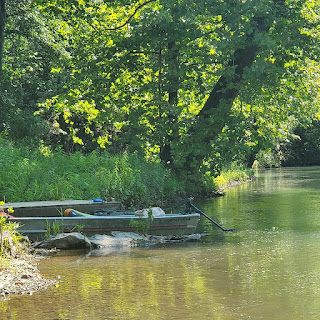 It was a hot weekend but we've had so much rain that the countryside is still very green, muggy air, but green, green, green. 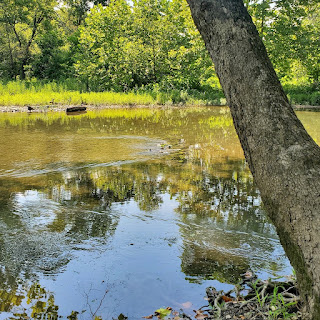 When I arrived I immediately contacted my girl friends there and they were heading to the creek.  Now, that kind of thing, walking around in water in the creek, I'm not able to do.  But I was able to drive the golf cart down close enough to the girls were sitting in their chairs in the creek with an umbrella in the water and sit on a chair on the edge and visit.  It was hot and steamy but I'm okay with that too.  The heat doesn't affect me like The Hubby.  The creek was so lovely and I got some lovely shots.  I promised the girls NOT to put their photos up and I'm true to my word.  I think I also got a few shots to paint and that is where I'm going this morning. 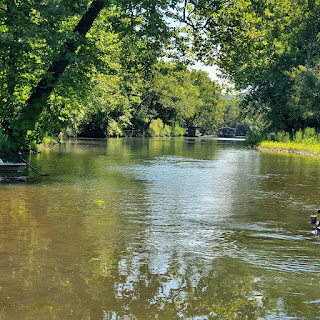 Also had this little visitor early Saturday morning.  He was there last weekend too.  I've seen turtles in our little yard over the years and I think they are the same ones.  I love it. 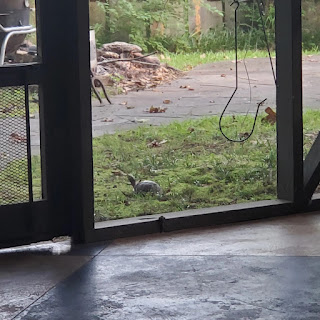 Thursday was not a good day at the office.  I went in to do a deposit and an invoice.  The previous day I put a magenta cartridge in the printer and then printed some stuff.  Thursday morning I got there and printed the deposit and invoice and a couple of other things then BLAM, the printer screen went blank.  I actually was able to print some other things and then tried to figure out what was wrong with the printer when it went offline and then NOTHING!  I messed around with it for a couple of hours and nothing.  I told The Hubby to get hold of his nephew, our IT guy to look at it, that we needed it fixed before this next Friday for payroll.  I took off to the cabin and then got text messages that J was there working on it and for some reason The Hubby had in his head that changing the cartridge was the culprit.  I explained over and over and OVER again that was not the problem but sometimes when he gets something stuck in his head he can't let it go.  As it turns out I WAS RIGHT!!!  After a few hours of them working on it and contacting HP the printer just crapped out and it was only 7 months old and under warranty.  They are shipping a new printer Wednesday and J will come and install so hopefully I will not have to do payroll or invoicing BY HAND!  Oh the problems of still working.  Hopefully we are closer to the end of work soon.  Good news though is our original building where we operated out of for over 30 years and have had leased out for the past 5 years has a new renter!  We've been working on finding a new renter for awhile now but the only inquiries were pot growers and you know how I felt about that.  This one is in the oil business and signed a 5 year lease!!!!  Woot-Woot!
I almost forgot that Friday before I left for the cabin I had lunch with my siblings (we try to do once a month).  My youngest and her family joined us along with my other granddaughter, Snicklefritz.  Little Min was not in a good mood at first but after a bit she settled and we had a grand time watching her and visiting. 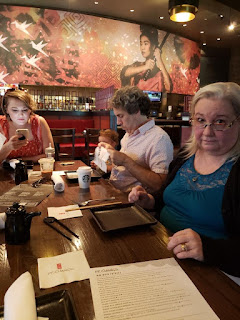 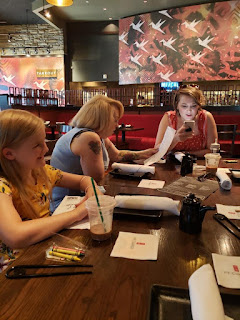