I thought I had written about another break-in but going back I guess I didn't. New Year's Day or a day or two after The Hubby went to the office to do a little office work. While there he heard a disturbance out front and went to investigate on the computer with our cameras. He discovered that it was just the neighborhood kids skate boarding on the parking. What he also discovered was that the back two cameras had been tilted upward, to the sky. He hurriedly went out back to find that the rail car containers that we use as storage sheds had been broken into. The fool proof locks had been absolutely broken in two. A little bit of copper wire was missing, a cement mixer (that belonged to one of our guys) and some junk was missing. The south gates were locked, at least they looked locked. The south gate had the padlock on it but was obviously broken also but reattached. He went to the master computer and found the day the thieves were there. They came during the day and scoped the place out and took a long piece of conduit and pushed the cameras up. Then they came back that night, broke the gate lock and the containers and stole from us. CRETANS! We have police reports, pictures of the vehicle and even pictures of the guys. This morning B was here and The Hubby had her print the pictures off for us to have for reference. She called me about 9:30 in a panic because she was here by herself and the red truck was back scoping the place out AGAIN! CRETANS!!!!! She was terrified. She said that The Hubby was in a meeting and had asked not to be disturbed. I told her to call our shop guy who was at our new building and that I would be on my way. I arrived and she had to leave for a meeting at her "other" job. Shortly after that our shop guy came in (she did not call him) and I told him what had transpired and showed him the pictures of the red truck. 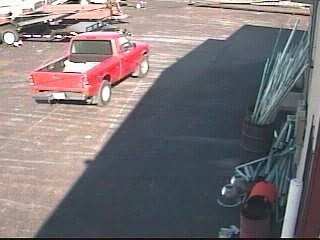 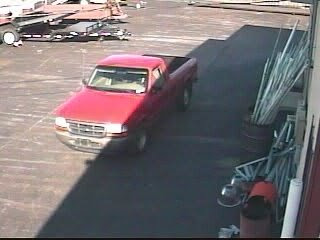 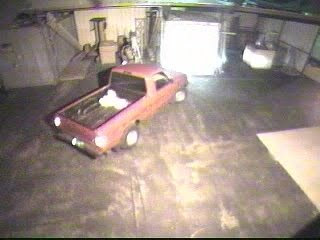 Later that night when they came back.

The shop guy took it all in and then had to leave to take some stuff to the new shop, in our truck that has a logo on it. As he was sitting at the stop light he noticed the truck turn and when the light changed he took off after it. It was the truck and when they saw him they took off like a shot. Now the numb nuts know we still have the idiots on camera. Absolute idiot stupid thieves. GET A JOB instead of stealing from hard working people! Can you tell I'm pretty pissed off right now!
Posted by Jill of All Trades at Tuesday, January 13, 2009

Thanks for following my blog Jill and I look forward to yours. Sorry to hear about your break in - not a good way to start off a new year!

That's horrible - I totally get your anger.... poor you! I hope it stops!

I hate thieves. I am sorry that you guys were victims.