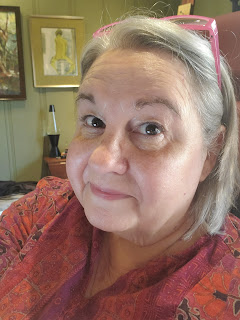 Good Monday morning all.  Yes still rehabbing from hip surgery but it's close to seeing the end of this ordeal.  Physical therapy was here bright and early this morning and she had me already sign that I would be released from PT on Friday!!!  That's exciting.  The Hubby seems to think I'm going to have a ton of outpatient PT but she said normally that happens on knees not hips!!! Wednesday, before all the ice that is supposed to be here, we go to my post-op where they will take out the stiches and I should be released to drive!!!  She said that the stiches are very ready to come out.  I looked at it today and the scar is really nice.  There are 14 stitches and they are quite pretty.  I'm moving around very nice and will probably continue to use the walker a bit more just for the stability, mainly because my stupid knee is giving me fits.  I was on arthritis meds during the first part of this and felt great but now that the prescription has run out for that my joints are hurting.  My knee, my elbows, my hands, my SHOULDER which I have to sleep on.  Can't wait to be able to sleep on the surgery side.  I'm hoping she will extend that prescription and if not I see my general doctor in a couple of weeks who may prescribe it.  I want to keep being able to move, move, move and it's difficult when the knee is screaming.  I'm not ready to have it replaced, yet.
We were able to toddle off to the cabin on Friday, a welcome relief to different four walls.  I'm spending a lot of time here at home by myself and it's quite boring now.  I've read two books, started another, napped, watched a LOT of TV, binge watched the second season of Sweet Magnolia's and I'm need something else.  The cabin was nice.  Fire roaring, friends over for drinks on Friday afternoon, it was nice.  The weekend wasn't without a bit of drama though.  Saturday night we went to John & Lesa's for dinner, beer can burgers, yum!  While there one of the ladies, who is a sports FANATIC to the MAX was of course going on about OSU basketball, then while we were beginning to watch a movie she wanted to watch the Olympics instead.  Okay.  Then she said she was recording it (then why are we watching it) and that she would watch it later at home.  I popped off and said, "You're recording it to watch later?!"  She replied, "that all the talking we were doing she didn't want to miss any of it."  I verbally did an glach sound to which she said that wasn't very nice.  Sorry girl but you force me EVERY SINGLE WEEKEND to watch damn sports, whether it's football, basketball or whatever and now Olympics, no matter who's cabin we are at.  It just takes me back to being a child and my father only watching the crap and us not allowed to watch anything (one television in the house.)  I have hit the point of total resentment to her on this crap.
Then the evening took another dark turn.  One of the other ladies wanted to have a discussion (mind you a bit of bubbly was on board for some) on a news story in the headlines.  She was just curious what we thought, posed a question about the Elizabeth Holmes-Theranos scandal.  She posed what/who does it benefit that she go to jail for 20 years - since the trial began she had a child that will never know it's parent for 20 years.  She was just curious and want some feedback from what she thought were intelligent women.  First mistake there.  The sports fanatic would not let her even get the question out, the story.  Every time she would start sports girl would interrupt and say guilty, send her to jail, or give a thumbs down, to the point that the questionier was then in tears and walked out the door.  Sports gal was so smug in her answer even though the question had not even really been asked, no discussion could be had.  It made the evening end on such a sour note.  The first time I met sports fanatic I thought she was so nice and sweet but over the years my opinion has certainly changed about her and definitely not in a good light.  So we will skip next weekend for The Hubby to dance and that will be okay with me.  I need a break from the STUPID drama.
Posted by Jill of All Trades at Monday, February 21, 2022