Yesterday I was on a mission.  I got a lot accomplished but let me back up a touch...

Friday, I picked up Snicklefritz from her Momma at the place where B's Alliday Show was about to begin.  It was about 10:30 and B was going to be interviewed by a noon news channel and Snicklefritz was going to be a problem.  So off I went to gather her up and to lunch at our favorite Friday lunch haunt, Bangkok Thai Buffet.  She loves to eat there too and cleaned her plate of pad Thai, rice, broccoli, and green beans.  That kiddo is a champion eater!  Run a couple errands and then we were home for the weekend.  Actually, she was only there for overnight.

Back home I was faced with a dining room that was full of pantry stuff that HAD to be put back.  I was planning on cleaning out the pantry in January, but with the possibility of cutting a hole or RIPPING out my pantry from the hot water leak, that time table was pushed.  Cleaning out the thing though I saw I had enough to make my famous White Fruitcake so that was on the agenda too.  So, first up was fruitcake, with Snicklefritz as sous chef.  It was so cute to see her expression when we began to beat egg whites to stiff peaks.  She was amazed to see the transformation. 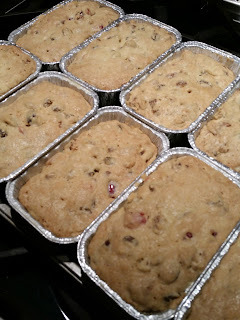 I got 10 small loaves out of the batter mixture and we put them in the oven and let magic happen.  Mind you this recipe takes 90 minutes and when the smell began wafting through the air she kept asking if we could take the cake out.  Finally, when out she wanted to eat immediately, but again, her patience was tried as we waited for some to cool. 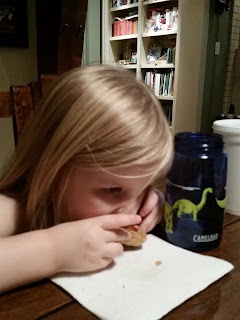 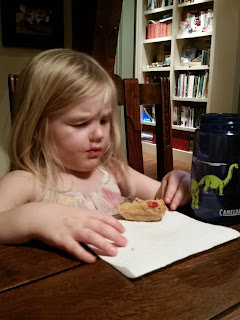 She really did love it and crammed that last piece in her mouth.  We had a great time but I still had LOTS to do.  The first batch was Friday night and Saturday after she went home I HAD to finish the pantry thing.

Threw tons out, revamped, moved foil, wax paper, ziplock bags to a drawer that I cleaned out and more space!  It took me all afternoon to finish and then I made yet another batch of fruitcake, 20 loaves in all.  We've already eaten two and given away one to Snicklefritz to take home.  My feet and knee were killing me by the time I finally got in the hot tub and then in the shower.  I still have a few things to do but it is done basically.  Now I have to wrap packages for Christmas.  I also have to go BACK to the post office Monday or Tuesday morning as I shipped A's Christmas leaving one out of the big box by mistake.  RATS.