I am not fond of doing the Black Friday thing but I did do a bit of online stuff this morning and I may be close to already done!!!!  Just a few gift cards and something for The Hubby!

Yesterday was a pretty wonderful day.  The food was great, the weather was great and the company was great!  We did have a bit of a hiccup though but it was not at our house.  We were all sitting outside enjoying the sunshine and visiting after gorging ourselves when we heard the fire truck sirens running.  We live close to the fire station so wasn't too worried but it kept going and getting louder and louder and more sirens.  We all jumped up and ran through the house and out the front door to see two fire trucks, two ambulances, and two police cars.  They were across the street at our neighbor lady's house. She is in her 90's but is pretty active and I think her son lives there with her.  Very shortly the fire trucks and ambulances left but the police stayed and it was apparent that she had passed away.  After about an hour with the police still there and family members arriving a van pulled up and we knew it was sort of a hearse for the funeral home.  One of our other neighbors said she had been in the hospital a couple of weeks ago.  I really had only met her once but it was very sad.  Kind put a downer on a day of being with family. 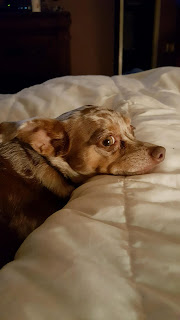 Anyway, Sis had asked me to paint her dog Nala and I finally got it done and she was thrilled.  She made sure to remind me to give it to her.   She loves it! 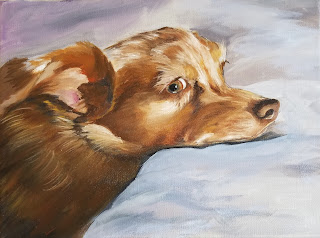 Today I messed around with an idea.  My mother found this painting in a farmhouse we lived in in Arkansas in the early 60's and it was old then.  It is cracked and some of the paint has fallen off but it's still beautiful.  I had it cleaned and reframed a few years ago from the nicotine from my parents smoking.  It has to be well over 100 years old now. 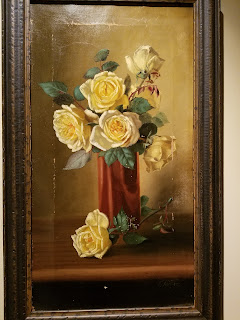 So today, I decided I would use it as my reference to tackle it. 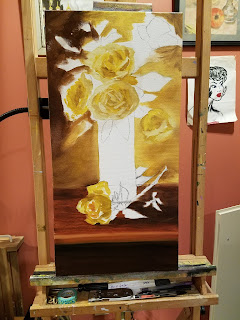 To top off my day today is when I tried to take a nap and just drifted off, DING-DONG...FedX...back to the couch and drifting off yet again when I heard knocking on the front door.  Up I go and as I walked I looked for UPS, no truck, but through the side window I saw a man standing at the edge of the step.  Through the door and glass I asked, "Can I help you." He replied saying something about needing a hard working man.  I said, "No thank you." Then he popped off, "What.  Are you afraid of a black man." OH GOOD GRIEF!  I said, "NO!  GO AWAY!" Kind of scared me to think he was going door to door and possibly just checking who would answer the door, to see who was actually home.

I never did get that nap.  I did get to see B on the Channel 6 news with Rick Wells and her potholders at Philbrook!