Last week was a busy week.  First of all, I sold a painting!!! 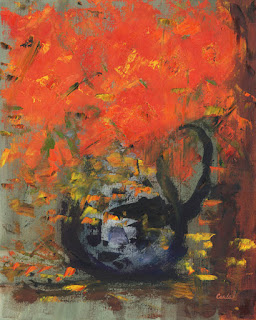 About a month ago one of The Hubby's business colleagues found out I was an artist, he collects art, so he came to the studio to check out some of my paintings.  He had his eye set on one in particular but needed to take a minute to think about it and would be in touch.  My thought was he thought my prices too high and he got his curiosity out of his system just looking.  So I was shocked when a little over a month later, out of the blue he contacted me saying he was ready to buy a painting.  WHAT!!!  He came back to the studio and I was under the belief it was for the painting he originally looked at.  Well, no, because when he walked in he was immediately drawn to this one on the wall.  Gosh, I painted it maybe 2009 or 2010...can't remember.  I've always loved it and others have too but it has remained on the wall.  He bought it.  I was shocked and so glad to see it had a new home.  Absolutely made my day, my week, my month. 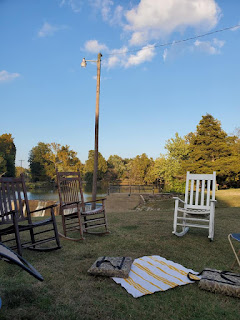 We again headed off to the cabin for some R&R and Friday evening it was planned to have a sandwich dinner at the wigwam by the waterfall. 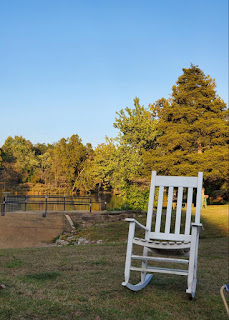 The evening air was delightful and we socially distanced ourselves while enjoying the company and dinner.  I so love our home away from home and it re-energizes me every weekend to continue on with the tasks at hand for the coming week.
We finally got Daddy's death certificate (hate that I have to even say that.)  I was very concerned that they (the hospital) might try to slip that he died of Covid because he was moved to the step-down floor, ICU, where Covid patients were.  He DID NOT have Covid, tested negative.  My fears were relieved when it basically said his heart stopped with the secondary of the liver and kidney's shutting down.  With the certificate in hand we were able to file for his life insurance, finish banking stuff and permanently forward his mail to my house.  It's all the little things that need to be done that you don't think of.  I also had to send a copy to his credit card to cancel it but can't call to check on that till the end of this week and I have to call his Medical Alert thing either today or tomorrow to make sure they close that account because it is on my credit card.  Lots and lots of phone calls and little things to do, and I guess that is what an executor does, that's me!
We're still bagging/boxing up Daddy's stuff.  When I leave I feel so dirty and gritty.  There is so much dust in the air and the kitchen is just greasy.  It's hard to believe that just a few years ago, 2009, we completely cleaned out the house to paint, carpet, CLEAN! 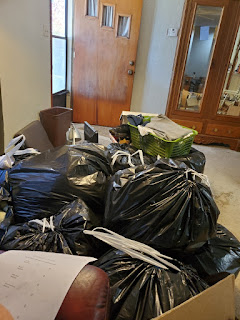 He was just a modern day "pigpen."  Mother was too when she was alive.  Next week we will have the Salvation Army truck come and haul off as much as they want.  There are still a couple of pieces that we are taking to storage but mostly it's just clothes and kitchen stuff that none of us wants.  Then we will do a few touch up painting spots and put the thing up for sale.  Being on Main Street, not a block and a half off of the Rose District it will be a hot commodity and looking forward to see what happens there. Really anxious to get it all taken care of so we can move forward with our lives, Thanksgiving and Christmas and cute grandbabies.
Posted by Jill of All Trades at Monday, October 12, 2020 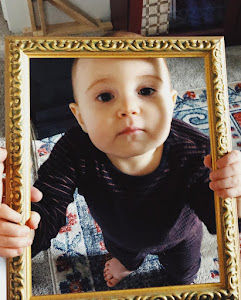